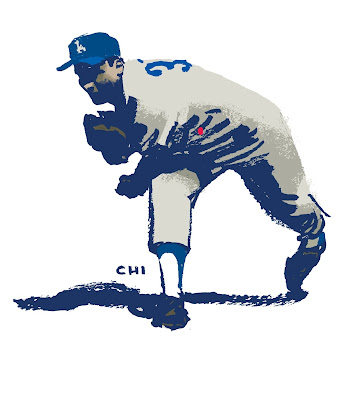 the great Josh Gibson was born. 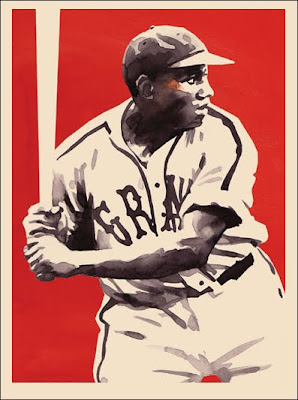 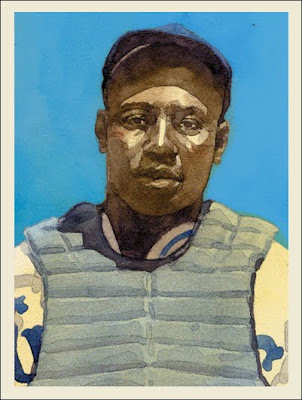 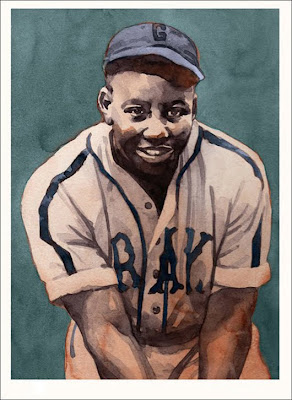 I'd like to officially invite you to come check out a new artblog that I've been asked to join. It's called "WHATnot" and it's full of incredible artists. Why they wanted me to be part is absolutely beyond me. It can be found at:
http://whatnotisms.blogspot.com
I won't be posting any of my paintings for it here on my blog, except this one (my first for WHATnot) so be sure to come by for a looksee... 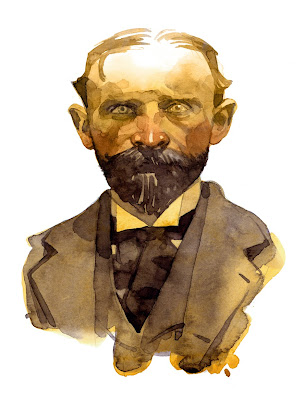 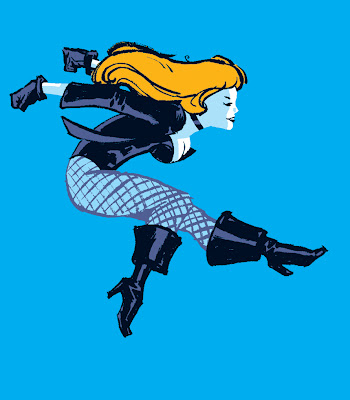 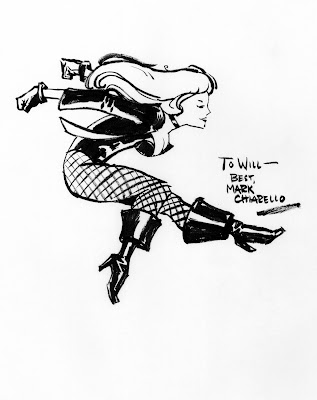 convention sketch of a character I've never drawn before...Black Canary.
My approach was somewhere between Alex Toth and Cliff Chiang (yes, I aspire to the greatness of those two guys!).
Not being a mainstream superhero artist, I thought this was going to be a chore, but I actually had a great time with it. Thanks to goodguy Will King for asking me to do it!
Posted by Mark Chiarello at 5:27 PM 3 comments: 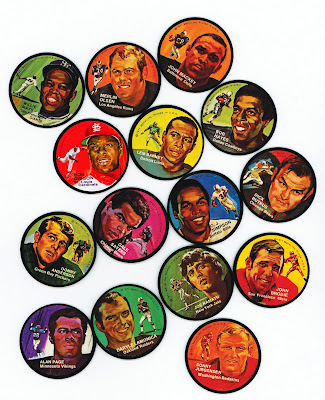 When I was a kid, I had this cool game called “Instant Replay.” Basically, it was a bunch of little 3 inch records that you popped into this little mini record player and it played an announcer announcing a great play of a particular sports hero. You know, a Willie Mays home run or an OJ Simpson touchdown or whatever.

I loved these little records and especially the paintings of each sports hero on each disc.

Recently, just for the hell of it, I made a counterfeit disk featuring a player that hadn’t actually been on one of the discs. 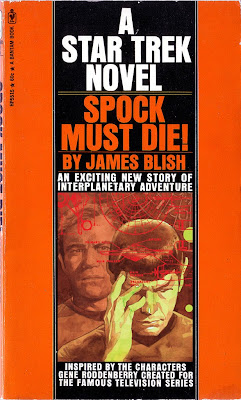 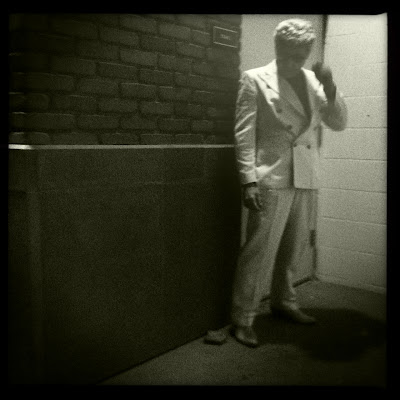 hung out with the LIVING LEGEND, Jim Steranko last Saturday. imagine that!
Posted by Mark Chiarello at 8:23 AM 2 comments: 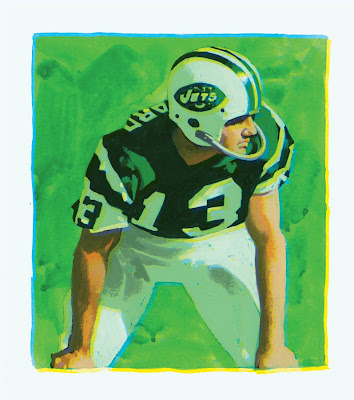 …have you ever tried to intentionally paint an image so it looks like an illustration from your childhood? You know, totally adopt the style of art that you grew up with?

Whether the 60's, 70's, 80's, or 90's, each decade had certain looks and even ways that paint was applied. I grew up in the late 60's/early 70's, when illustration was starting to break away from the conservative 'advertising agency' approach of the 1950's and becoming more colorful and a bit more wild. Of course, this was Madison Avenue's attempt to co-opt what "the kid's" were wearing and eating and talking about.

For me, each decade is pretty easy to pinpoint, there's a fairly clear difference in the look(s) of an illustration or product design from the 1940's to the 1950's. The same holds true for the 60's and 70's. It's when we get to the 1980's and 90's that things become a little less clearly defined and distinguishable (to me, at least).

Anyhoo, above is my entry: an illustration of football Hall of Famer Don Maynard (who, by the way, was the first player ever signed by the NY Titans, who a few years later, changed their name to the NY Jets).

Can't you just see it on the box cover to a kid's game or football card from 1971? 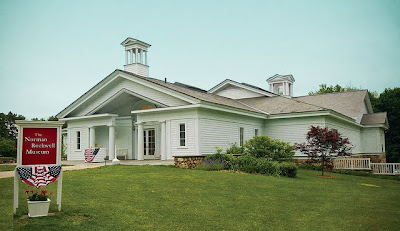 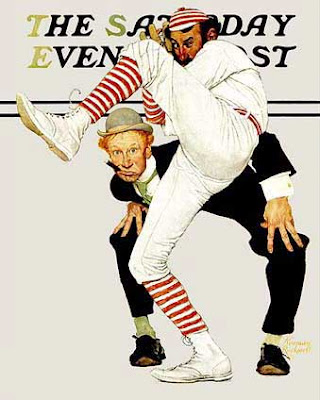 just got back from 'baseball day at the norman rockwell museum.'
I exhibited several of my paintings and spoke about baseball, the negro leagues, and being an illustrator. I even did a watercolor demo in front of what seemed like a million people (!).  Yup, I was pretty nervous, but somehow got through it all, meeting a lot of great people who had stories to share about their own childhoods and their own love of baseball.  Two standout people were the curator of the event, the AWESOME Tom Daley, who graciously made me feel at home, and the DOUBLY AWESOME photographer Jane Shauck.
thanks to all who came and especially the guys who helped out (thanks, Jeremy!).

here's the painting demo that I did.  it took about an hour... 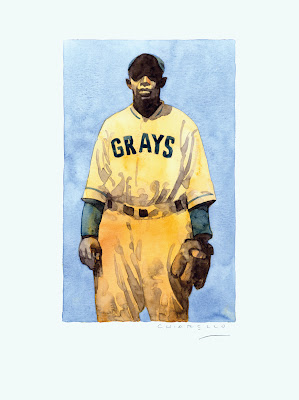 ...and here's some of the aforementioned Jane Shauck's photos of the new york mets.  great images! 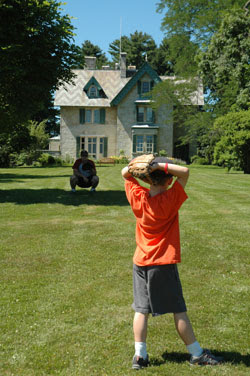 and speaking of Norman Rockwell...

this Saturday at the NR Museum in Stockbridge, MA...
I'm very pleased (and honored) to have been invited to speak at the museum about my portrait work.
I'll also be doing a watercolor demo.  YIKES!  keep your fingers crossed that I don't muck it up! 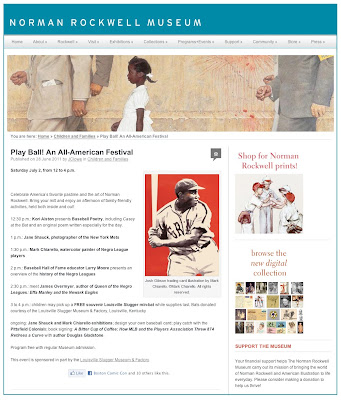 here's the cover to a recent baseball publication that looks solely at the history of baseball in the Negro Leagues.  I'm doubly proud of it because the editor and art director actually let me change their usual cover design so I could create this image of an 'imaginary' set of NL baseball cards.  I mean, come on, we ALL kept our stack of cards together with a big rubber band, right? 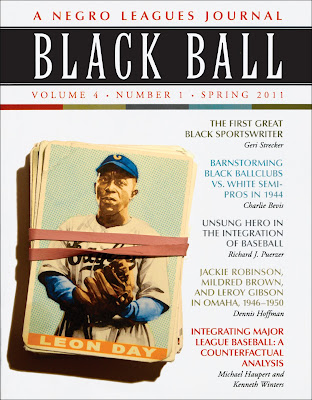 Posted by Mark Chiarello at 8:41 AM 2 comments:

had a wonderful time in Derry, Ireland at the charming, fun, family-friendly "2D Comics Festival." Chatted with lots of kids and looked at the portfolios of a lot of talented artists. Drank a lot and had a lot of great conversations. thanks, all.
Adding to my comic book superstar photo series are...
glen fabry (man, he lives up to his reputation)
mick mcmahon (the living legend!)
rufus dayglo (great artist and a real sweetheart) 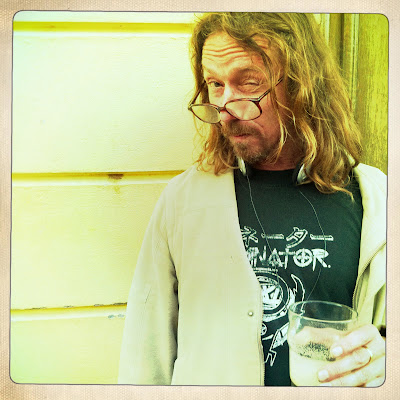 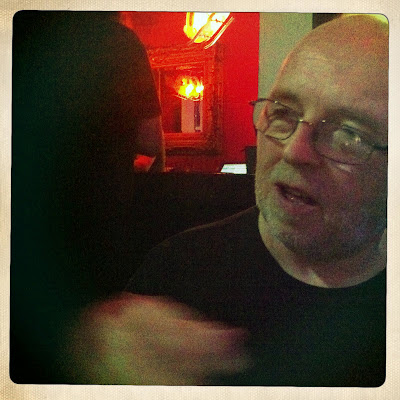 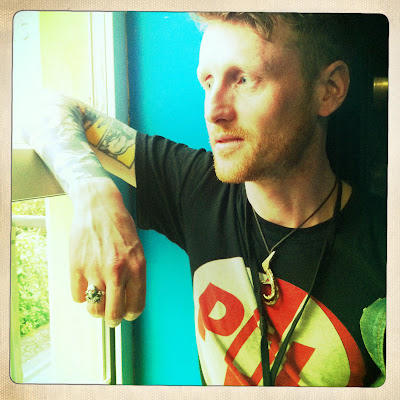 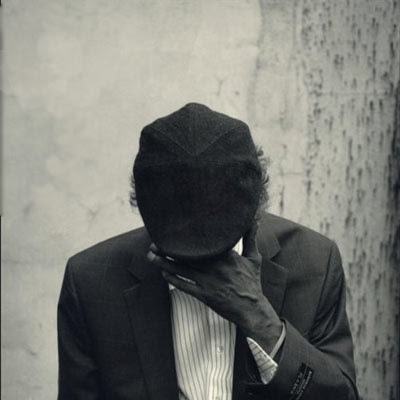 Posted by Mark Chiarello at 9:40 AM 2 comments: 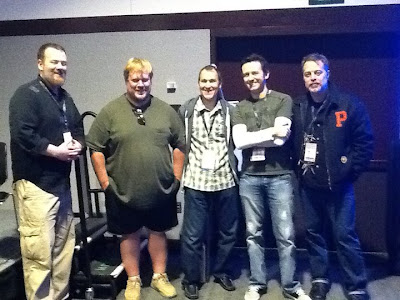 the Boston Comic Con has, in four short years, turned into one of the very best and most fun cons of the year. Thanks to Nick and Jimmy (and my pal Colin) for inviting me up this past weekend and treating me like royalty.
I moderated a panel on 'the art of the cover,' which featured Dave Johnson, Adam Hughes, JG Jones, and J Scott Campbell. What these superstars were doing hanging out with me, I'll never know!
Posted by Mark Chiarello at 5:37 PM 3 comments:

...check out this entry in a
scholarly baseball journal from 2010:
Empire and Objecthood
The Baseball Paintings of Mark Chiarello
by James Brunson

This article examines Mark Chiarello's baseball paintings, which have a deep connection with the rhetoric of empire and colonization. This paper argues that during the 1980s and 1990s baseball objects (art and non-art) were forged in a colonial encounter, with the beholder as an imperial, imperious consciousness, capable of surveying and ordering the entire object world. Chiarello's paintings belong to a "baseball order of things" (a phrase inspired by Michel Foucault's "order of things"), an epistemic field that produces a sense of the kinds of objects, the logic of their speciation, and their taxonomy. Of interest are not only the ways that baseball objects are catalogued, preserved and arranged in rational order but how acts of judgment and dialectics of taste constitute black images. 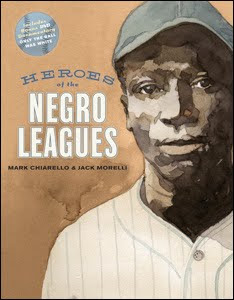 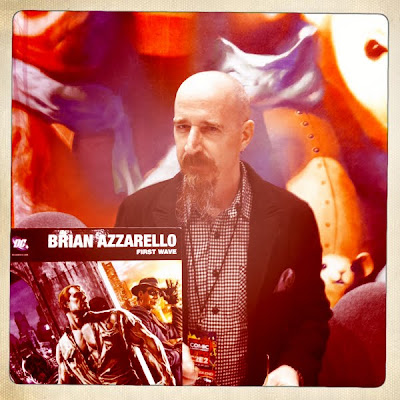 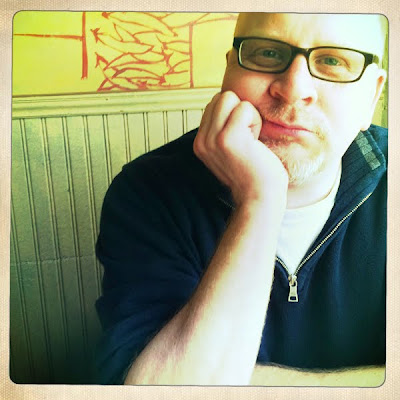 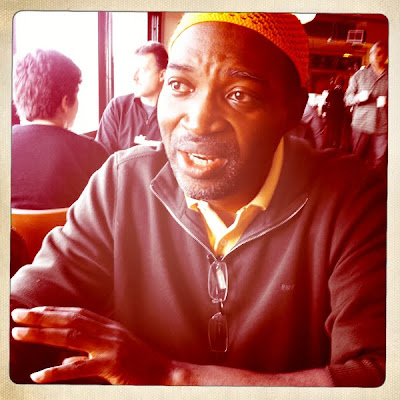 just got back from the fabulous Emerald City Con in the VERY fabulous Seattle, WA.
One of the many highlights was breakfast at the Pike Place Market with two of my favorite artists and favorite peoples, Cully Hamner and Brian Stelfreeze. good times, boys. good times. 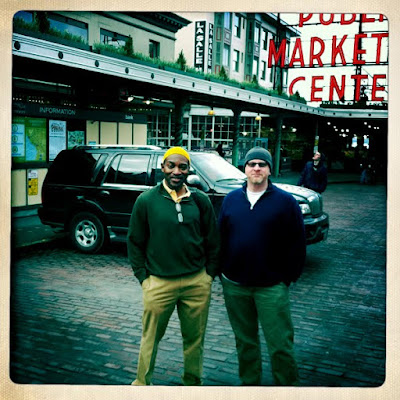 the way I remember them from when I was a kid... 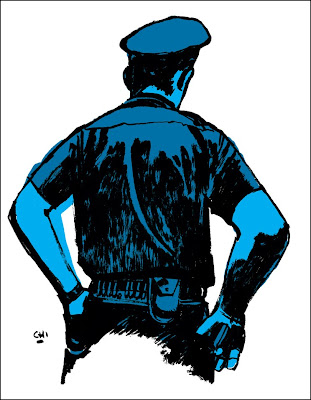 Posted by Mark Chiarello at 8:35 AM No comments: